One day in the not-too-distant future, a huge part of the Internet will succumb to a Chinese cyberattack or technical cock-up, plunging whole economies into crisis and triggering supermarket aisle bust-ups over bog roll and other sundries that make last year's COVID-19 survivalists look relatively well-behaved.

The world had a warning of it today when Fastly, a heretofore little-known cloud computing provider, experienced "global CDN disruption" (CDN meaning content delivery network) and a number of very well-known websites went dark, as Jack Bauer might say. They included the UK's own government website, the New York Times, Financial Times and Guardian newspapers, and the likes of Amazon, Reddit and Twitch. 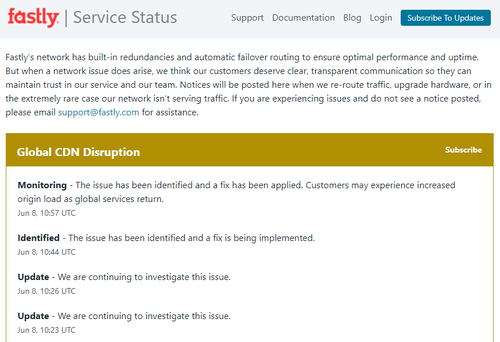 Thankfully, it was a short-lived blackout. Fastly acknowledged problems on its website at precisely 9:58 a.m. UTC. By 10:57 a.m., before the would-be looters and supermarket scrappers had even made it out of their homes, most sites were back up and running. "The issue has been identified and a fix has been applied," said Fastly, as technicians wrung the sweat from their t-shirts. "Customers may experience increased origin load as global services return."

While customers of Fastly's customers try to figure out what "increased origin load" actually means, the world should be a little worried. In the bigger scheme of things, Fastly is a tiny company, generating only $85 million in sales for its most recent quarter and racking up a $51 million loss. And yet this unprofitable minnow temporarily paralyzed a few major organizations and knocked out a whole government website.

Beeline for the cloud

None of this would matter half as much if the entire pandemic-hit planet were not making a beeline for the cloud. Fortunately, the CDN market in which Fastly operates is still extremely vibrant and competitive, featuring the likes of Akamai, Limelight, EdgeCast and Imperva, to name just a handful. With fewer providers, an outage could have taken down a much bigger number of sites.

But it will have escaped no one's attention that cloud computing is increasingly about a cabal of all-powerful giants who live in Silicon Valley and Seattle. Fastly acknowledges as much in a recent filing with the US Securities and Exchange Commission, noting its own dependence on those companies. "We rely on third-party hosting services such as Amazon Web Services ('AWS'), Google, Softlayer (acquired by IBM), and other cloud providers that facilitate the offering of our platform," it confesses.

"Some of these third-party hosting services offer competing products to ours and therefore may not continue to be available on commercially reasonable terms, or at all," Fastly continues. "These providers may be unwilling to do business with us if they view our platform as a threat. Any loss of the right to use any of the hosting providers could impair our ability to offer our platform until we are able to obtain alternative hosting providers."

Public cloud evangelists will ridicule any concern. AWS, Google Cloud and Microsoft Azure, the "big three," are highly profitable, multi-billion-dollar firms that are not about to go out of business anytime soon. If the CDN market consolidates and makes them even stronger, customers would have less to fear than they do from Fastly. No doubt, there is plenty of "redundancy" in each public cloud's systems, including enough data centers to house the world's homeless.

All that is true. It is obviously better that AWS and not Fastly has ultimate responsibility for most organizations' IT systems. And a technical blunder or bit of Chinese malware could probably cripple an on-premises IT system more effectively than it could hurt AWS.

None of that makes heavy reliance on a trio of public clouds look wise. Big firms are not invincible and have collapsed previously, for whatever reason. Just look at the $100 billion Enron or the banking sector's Lehmann Brothers for examples of companies responsible for their own downfall, or to Kodak for one hobbled by the emergence of new technologies. That Amazon, Google and Microsoft are even bigger, and seemingly more resilient, should actually make the world even warier.

Whether using AWS or Fastly, the decision to rely so heavily on Internet infrastructure, and have no recourse to an alternative, is one companies and people may someday regret. Technology enthusiasts have applauded the adoption of Internet services during the pandemic as if nothing could ever go wrong – and in an age when cyberattacks by hostile governments and more humdrum security problems are all too real. Organizations appear to have had a massive blind spot about the cloud. Today provided another brief glimpse of what that could eventually mean.