Elive Beta With Enlightenment Is Brilliant, but Don't Get Lost in the Maze 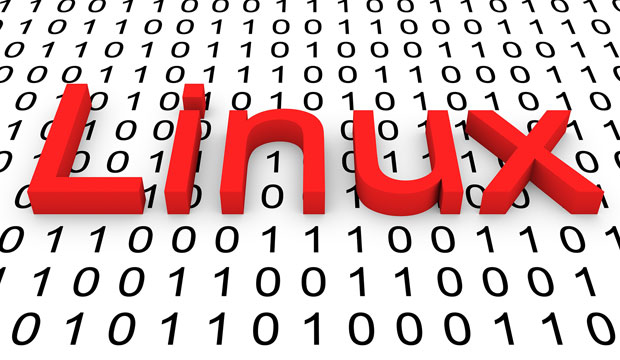 Elive is one of the most multipurpose and different Linux distributions you are likely to encounter.

Elive Linux is an awesome integration of the Debian Linux base and the Enlightenment desktop. The combination provides a uniquely powerful and flexible computing platform.

Its name suggests only a part of what makes this distro unlike the few others that have the lightweight Enlightenment desktop baked in. Elive is actually a live session environment that is capable of providing persistent memory so you can save settings and data without fully installing it to a hard drive. It also is a modern computing platform for full installation to a hard drive.

You can run Elive from a DVD or install it to a USB drive with plentiful options. This makes Elive a portable computing solution. You can plug it into any computer you use and have everything you need at your fingertips.

Persistence set up on a USB drive is a very handy alternative to an actual hard drive installation. The persistent memory feature lets you add and remove software, and keep configuration settings and saved data intact.

I periodically revisit Elive to see what new features are in the distro itself. So a recent update notice prompted me to take Elive 3.8.8 Beta for a test run. 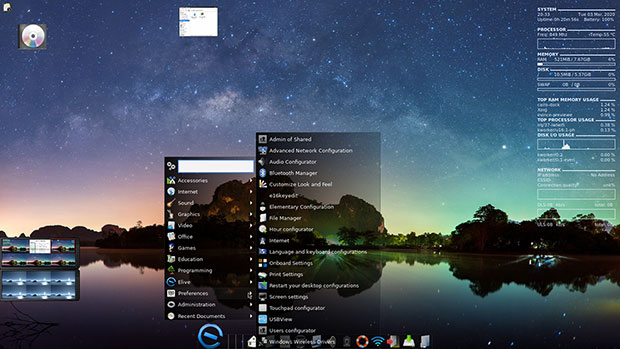 Elive 3.8.8 Beta has a look and feel that's different from earlier editions.

Elive defies the notion that the distro is lightweight. The Enlightenment desktop is a speed demon. Integrated with Elive, it runs circles around other lightweight desktops that have a lot less functionality.

Samuel F. "Thanatermesis" Baggen, the founder and developer of Elive Linux, created the operating system for his personal use around 2002 and shared it only with family and friends. The first public version of Elive appeared three years later.

The Belgium-based developer's goal was to make Elive Linux a reliable alternative to other operating systems. Its real attraction, aside from its stellar performance, is the uniqueness of the Enlightenment desktop.

The 3.8.8 beta released late last month temporarily uses the older Enlightenment 16, or E16, desktop to facilitate a faster development of Elive 3.8 before integrating a newer desktop version, according to Baggen.

So regressing to the more stable and older E16, even temporarily, was a less inviting test drive. The experience blunted my interest in checking out the E23 desktop upgrade.

However, the otherwise updated base software and the wide-ranging fixes and changes in Elive 3.8.8 itself produced a glimpse of more innovation to come.

The Thought Behind the Process

Before proceeding with my impressions of the Elive 3.8 series, let me share some of an exchange I had in discussing the significance of Elive Linux with Baggen. I was curious about what he sees as the driving force for developing this unique operating system. He provided details about what is different and better in the current beta release.

"When Knoppix appeared to the world, it was a magnificent concept to run everything from a cdrom and RAM," Baggen said.

"But just like any other OS, I felt unsatisfied with the desktops provided. So it all started as a customization of a Knoppix using a different desktop," he told LinuxInsider. 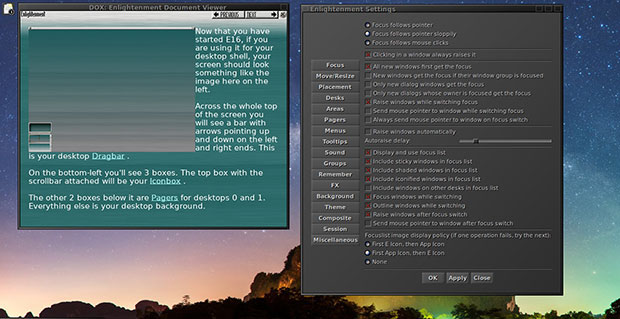 Baggen was so satisfied with the result that he wanted to share it with the world, and one month later the first version of Elive appeared. Details about the distro were mentioned in a few publications, making the initial release a big and unexpected success. So he decided to continue improving the system over the next two years, improving every aspect and making it more special.

Developing Elive took a large toll on his personal time and resources. He soon faced a tough decision: Either stop the project to search for "normal work" that paid, or continue working on the project and try to survive by asking for donations.

It was not an easy decision for him to make, Baggen admitted. It was users' expressions of satisfaction and many urging him not to quit that led Baggen to making a donation part of the process of downloading new ISO versions.

He continues using that approach today, but he also allows donation-free downloads by request. The process requires you to verify your email address and wait for the download link.

"The decision was not easy," Baggen reiterated. "The ones who really appreciate it would lose if Elive doesn't exist anymore -- if I don't try at least to keep it alive from donations."

Since 2005, Elive has been Baggen's full-time work.

The Purpose Behind the Distro

Elive is not focused on a single goal or a specific type of user. Rather, it is more like a ready-to-use computing system for any type of user. Users can customize it if desired, or they can be productive using the default configuration.

"The main purpose is to have everything working as expected by default, and not need to worry about the details or even knowing how to make things run," Baggen said.

In the end, the driving force to make Elive is to offer a different computer system that works with everything needed included, he noted. Even users without much experience can use Elive Linux without difficulty.

Even comparing the current beta release with the Stable version reveals that the full user experience is really different, according to Baggen. That is why he chose to drop back to the E16 desktop while he prepares the debut of the new Enlightenment desktop.

"Nothing is bad about it (E16), and it includes a pleasant different experience, providing an extremely solid and unbreakable desktop which makes it perfect for the daily work," he explained.

Many of Elive's unique features are integrated into the E16 desktop as well. Plus, the new beta version includes recent software and drivers, and 64-bit support -- something that's been wanted for a long time.

The beta release includes many updated drivers and a wider range of supported graphic cards. The new beta has newer innovations such as automated, or smart, features. It also offers better compatibility with new specs like UEFI or Nvme disks.

Due to its different nature, it never attracted a really big audience. That is probably because people are more used to common desktops or Ubuntu-based systems, he reasoned.

"But that is not really a problem for us. We have a very satisfied, friendly and happy community. Having more users also means more work and more resources, much more time invested. Elive is simply for those who appreciate it, and its own style and personality are probably one of the best things that it has," Baggen said.

He has experimented many times with usability trials. For example, he gives the system to inexperienced and elderly users to see how they fare with it. Based on those results, he polishes final aspects of a new release.

"So in the end, everybody is welcome to get Elive and use it how they wish," Baggen said.

Elive has its own personality and way of working. It focuses on intuitiveness and productivity, he added. Enlightenment is a different desktop, light and powerful. It provides many possibilities.

"This is important for Elive since it has its own vision of an operating system. The downside of selecting this desktop is that it requires much more work and customizations to make it behave as wanted," Baggen said.

This new beta version includes Debian Buster base system updated to version 10.3 with the kernel updated to 5.4.8 and extra drivers updated too. Web browser extensions are enabled by default for ublock-origin to block ads and annoying messages from websites.

A plugin is included to download any media file to your computer. Downloads now are set automatically to the default Downloads directory of the user's translated directory.

If you are not familiar with Elive and Enlightenment, your best bet is to start with the stable version rather than this beta release. A world of difference exists in the layout and some of the features.

The Enlightenment experience is not for all Linux users, especially less-experienced ones. Learning how to navigate within the Enlightenment shell is where the learning curve occurs. A second, steeper curve involves figuring out how to massage the seemingly endless options to customize the desktop functionality.

The Enlightenment desktop has so many options that you easily can get lost in the choices. The settings panels and dialogue boxes are simple to use. In most cases, the process involves left- or right-clicking on a window or on the desktop screen, selecting the menu and checking or unchecking the choices.

The Elive desktop view is beyond nice. It is uncluttered. Instead of a traditional panel bar, it has a Cairo Dock centered at the bottom with a main menu button on the far left.

Elive provides animated elements like backgrounds, icons, widgets and the terminal. It makes it possible to have an animated desktop with 3D effects without an accelerated graphic card.

The design of its menu system and user interface are very different. Depending on whether you right-click or left-click on the desktop screen or on a window or icon, a different context-related action menu pops up. Working without a traditional menu system and panel with applets takes getting used to.

Depending on the options you select, the screen can display a systems monitor widget in the upper right corner. You also can opt to have a desktop dragbar.

The gragbar stays at the top of the screen and has up and down arrows at both ends to switch among desks. Right-click on this bar to see a list of open windows on each virtual desktop and navigate to a selected screen.

If you ever used the Activity panel in the KDE desktop, Enlightenment's concept of Desk and Virtual Workspaces is less jarring. By default, Elive has two desks by default. These are tab-like panels that jut out from the lower left edge of the screen. You can click on the handle to retract the desk panel or show it.

You can add or remove as many desks as you desire. Each desk displays any number of workspaces you set. The number seems limitless. You can run different applications and windows in as many workspaces as you want.

In essence, the concept of desk in Elive, more so than other distros using any of the Enlightenment desktop versions, is a combination of virtual desktops and Activity panels rolled into one feature. The dragbar is akin to using a desktop switcher applet to navigate virtual workspaces.

Taken to the extreme, this desk concept in Elive is like trying to navigate in a huge maze. Used with moderation, the desks can offer the equivalent of having multiple physical monitors to distribute your working windows and tasks.

If you take the time to fiddle with Elive's design controls, you can finesse its desktop appearance and functionality like a painter creating a scene on a canvas. Do not get too involved with configuring all of the settings, though, or you will find yourself in a timeless void.

If you have lots of time to devote to learning something new within something old, check out Enlightenment -- but do it through a distro built around it. Do not try to do your own Enlightenment integration by manually adding Enlightenment packages to your current Linux distro.

Baggen includes several self-help displays and clear documentation to teach you the basics, along with some advanced tips.

Take a look at the distro here